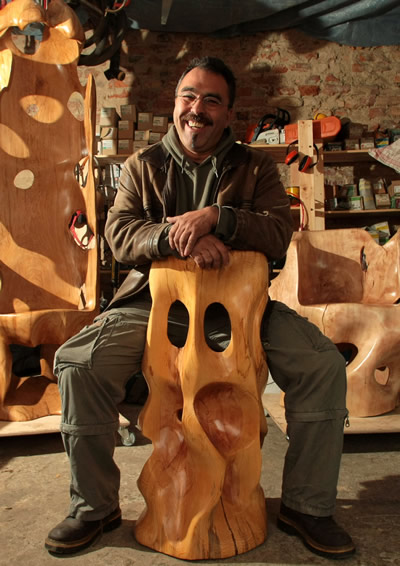 My name is Andreas Schymczyk and I was born in 1960 to German parents in Naples / Italy. Afer an eventful childhood and a few detours, among others into the motor vehicle field, I found my way to the craft of woodcarving. As a carpenter I have more than a decade of experience. During this time I was able to broaden my knowledge in regards to the material and also in regards to managing competencies, owning a small company and being responsible for 20 employees. Unfortunately I witnessed deliberately planned botched jobs rather often. Due to my commitment to quality I decided to turn my back to this field and from then on used my savings to create a meeting place for artists and art lovers in a run-down property in Berlin Alt-Marzahn, the “Kunstruine” (art ruin). It was a one man project which expanded over the years and eventually didn´t leave much space for my creative work besides the managing tasks. Afer 12 years I made the decision to make room in my life for art and to quit the “Kunstruine”. My love for martial arts and also my art pieces have helped me through this process. Since 2013 I have been happily working as a woodcarver and have been giving martial arts classes.

About my wooden chairs 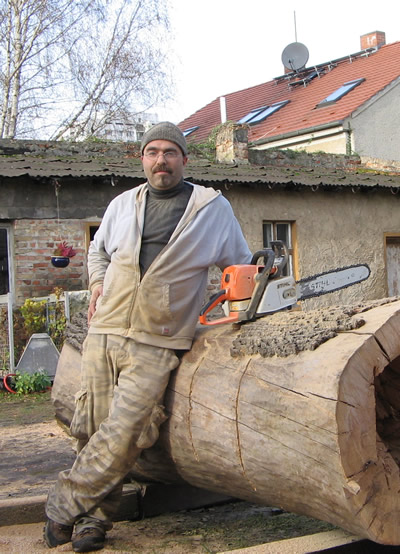 A big part of my woodcarving passion is dedicated to my tree chairs, which are wooden chair sculptures carved out of one single tree trunk. Afer spending two years with each piece a special bond develops by forming it and trying to capture its soul throughout the carving process. It is a similar relationship as with my children. I love them and know them until their smallest wooden fiber. Some of them are light and carefree, like the time in which they were formed. Others are tricky, full of depth and not so carefree, but non the less beautiful in their own way. They are manifested emotion.
Artus, for example, I have found as waste at the site of a military training area, where the huge trunk began to rot unnoticed. A warrior on the ground. At this point of my life and I did not have the most joyful time either. So the trunk and I, we immediately began to build a relationship with each other. Artus is a symbol of a struggle for survival and outcome of countless days of communication and negotiation between us, me and the wood. Rosa on the other hand symbolizes ease and joy for me. Not that working with difficult pieces in dark hours would not exactly give me as much joy. Each piece has their own energy, which equally fulfills me with pride and joy.

Humor is important, but oddly enough, people don´t always share the same :) That's why I want to say a few words about my beloved, by others sometimes seen as provoking, Sumo. He has accompanied me for almost 35 years, large parts of it even as a logo. He was drafted for me by a brilliant Japanese designer, representing my grounded being as well as my childlike curiosity. We only learn when open to the unknown and willing to try new things, that´s what the rocking horse stands for.